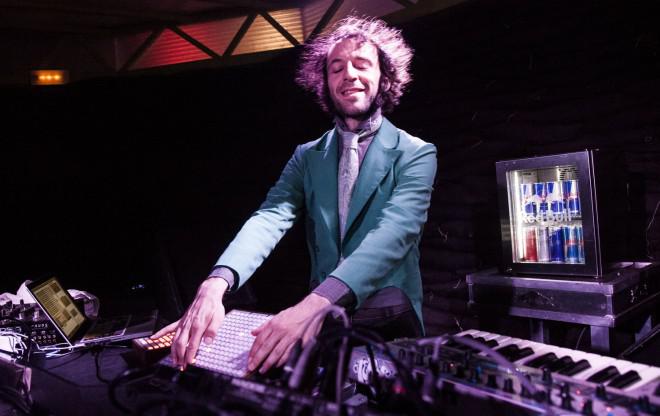 First of all I want to thank you for taking some time for us! This year was a great year for you, you released one solo album (”Love To Make Music To”, which is marked as one of the best albums of this year by many people around the electronic music scene) and also the Long Lost lp in collaboration with your wife Laura Darlington all released by Ninja Tune. How did all these things come up this year?

Thank you very much for listening! I believe it is very difficult to be heard in 2009, loud records like “Love To Make Music To” have an easier chance then a quiter one like the “The Long Lost”, but both sides are important and hopefully vibrant. Timing is never perfect, and any chance is worth taking, but I hope listeners are up for the journey, be it a shout or whisper…

What are your musical influences that whipped you out to create your own unique style?

I owe my musical style to long exploration in dusty vinyl (starting with my parents collection, and then later on my own in record stores are Los Angeles). Mostly movie soundtracks and children’s recordings at first. Composers like John Barry, Michael LeGrand, Bernard Hermann, and many many more. Eventually I began listening to more modern sounds, mostly in electronic and HipHop musics, people like Acen, Bay B Kane, and the Bomb Squad. Somewhere between these two worlds I make my home.

As i found out you play some musical instruments, what is your musical education and how did you get involved in music?

Before the record collecting I played a few instruments (Double Bass,Bass Clarinet) and thought I was going to be a Jazz player… My life didn’t work out like that, but I did get an education in music theory and composition, and I’d like to think it has helped my approach to electronics. Everything since has been fortune and luck, maybe also a lot of hardwork and long hours as well.

The Monome is a very wonderful instrument that I feel very happy to use. It was recently invented by Brian Crabtree, and I was one of the very first to use for live shows. It allows for a lot of musical exploration and experimentation, and I can be heavenly or diabolical for the right audience. Hopefully this weekend’s gig can be just as energetic!

Daedalus is a name by a well known ancient greek hero of the ancients greek myths did you get your alias by this myth?

I know I spelled Daedelus very different then the Greek mythology, but that is the very same person I derive my alias from. He was the greatest inventor of his age, and I make no personal claims for such an auspicious genius, but I do dream of it. I also connect with the tragedy and heavy emotions, he did after all lose a son (Icarus) and kill his cousin…

Which artists did you picked out this year and which releases did you like?

There has been a lot of wonderful sounds this year, really refreshing, and a great deal of it has been from my home town! People like Samiyam, Teebs, Nosaj Thing, Flying Lotus, Jogger, Take, Ras G, Tokimonsta, and so many more. It has been an amazing year thus far.

I see you are also a founder dj at the Dublab radio which is a web radio. How do you see the future of web radios that are rapidally developed all over the world?

Dublab.com is about to celebrate it’s 10th year of operation which is incredible! However web radio is in danger of being silenced, you see the music industry in America is very difficult, there just isn’t very much money in broadcasting or sales. Happily Dublab doesn’t transmit for profit, it is all because of a passion for good music! So I can’t see it stopping any time soon, but other stations may have some great difficulty.

Fair Weather Friends is a beautiful song about friendship and human relations, do you get inspired from personal experiences?

Songs always come from places, nowadays mostly the places I’ll play on a tour. As well perhaps because I grew up in such a cinematic city like Los Angeles I often have little imagined movies to my songs that give them direction. Music is amazing by all the ways it can emote.

What are you planning to do in the near future?

More music and a lot of touring! Next release will be an EP entitled “Righteous Fists of Harmony” based on the Boxer Rebellion of 1898, then a LP called “Bespoke”, and then who knows? Mostly it’s touring all over the world, I can’t wait until the next!

Thank you for sharing those beautiful thoughts with us and we can’t wait to hear you playing this Saturday. Best from Greece.

Thank you for the questions and I really am looking forward to playing. Best of best until, Alfred!