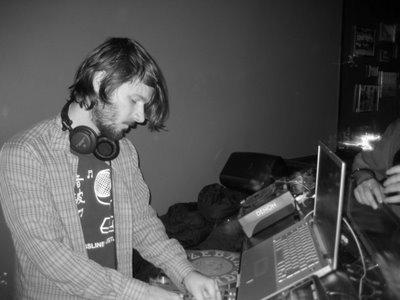 Firstly how did you get involved with djing and the music industry and when did you first started spinning vinyls?

Raves and psychedelics will get anyone and their mother into spinning vinyls.

Tell us about your music heroes and the artists that inspired you.

Hmmmmm i’m not sure i have any musical heroes, turning people into heroes just leads to dissappointment in my opinion and experiences. but there is plenty of inspiration out there. I’ve always championed Tortoise, Jim O’rourke, Alpha Blondy, Stereolab These guys for me are scientists of music and still maintain a thick layer of soul. But really it’s anything i can get my hands on that sounds interesting that inspires me to make music. ANYTHING.

In electronic music dance scene during the last years many genres have popped out and the thing is that many of them seem similar.Do you believe that this situation confuses the audience and further more do you find this neccessary?

I was just saying this to one of your greek comrads last night actually. yes there are many fads and trends in electronic music. i think it’s the ‘throw away’ stuff that gets trapped and dies with these trends. Anything of quality that’s created during these spurts of ‘creativity’ outlives the label. electroclash = techno/electro, nu disco = house, minimal = techno, nu disco = house(happened twice), and now the one i’ve been waiting for the longest, HOUSE MUSIC IS BACK! haha. early 90’s house is a trend, this just cracks me up. I didn’t know it left.

But i think the main problem with these trends is the people that get into them are very narrow minded. If disco becomes popular it’s all they want to listen to. if electro becomes popular then you go out to the “electro party”. what happened to playing and listening to many different styles in one evening, or from one dj? these pigeon holes have never helped anything. and these dj’s that play the music are very uninteresting, untalented and boring to me.

Besides being a dj with realeses in several labels like Modal,Wurst, and Daniel Wang’s Balihu you are also a label owner,it’s name is Chinatown Records with releases from Runaway,40 Thieves,Studio and of course yourself.Give us some more information about Chinatown records and how did Chinatown Records come up?

I wanted a venue to release my own stuff without having to sell it to other labels and a place for like minded musician/friends to do the same. I still like working with other labels, but i prefer to keep the things i write to myself.

What have you liked a lot lately,and which artists did you pick out this year?

Haha i have no idea man. i’ve listened to two really cool dj’s on this trip, Baris K & Mini from Istanbul basically reintroduced music to me with their sets in zurich, and Nanouk from Maastricht is one of the tightest dj’s I’ve seen in awhile, look out fellaz!

What do you do in your spare time?

Let’s just leave it at ‘gardening’

What are you planning to do in the near future?Is it more about touring or producing?