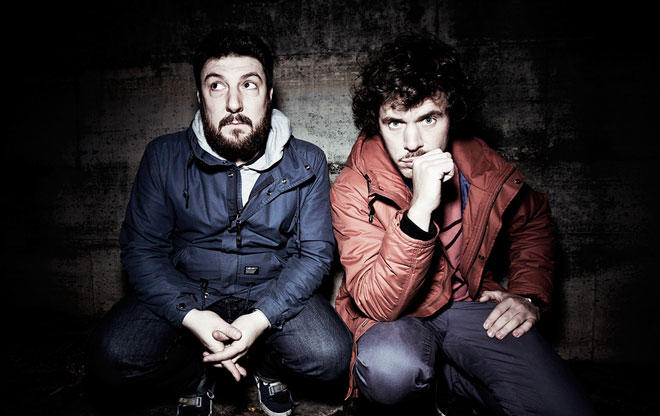 How did you guys meet up? How did you decide to form Souleance and move on with producing 2 LP’s and several EP’s so far?

We met in Short Film Festival called Off-Courts In Trouville (France) 6 years ago for their final party.. Fulgeance was rehousing to do his Live Show and I was djing for that night. Finally we both dj and got along really well..

We got to making music through loops and ideas that we both had, and sampling black music in general. We thought first to do a White label release with re-edits and records but as we moved on, we made some tracks, and thought we could send our demo to some labels..

Pierre is a well-known beat maker, label owner and a sensational food lover. Soulist on the other hand has made himself a name as a club night host in Paris (What the Funk?).

I presume that you both influence your productions as Pierre brings in the abstractness and Soulist the funk? Or is it the other way around?

Well it’s a bit like that but not entirely.. Fulgeance is the main Architect and we work together to on the ideas, the structure and of course the final result. I bring samples, ideas, sometimes we improvise an dame for Fulgeance who plays, bring samples very often.
Fulgeance is Abstract ash he is funky. He is really both..

So far you have released music in a very respectful label i.e. First Word Records which releases music from the likes of Tall Black Guy, Ariya Afrobeat Orchestra, Kidkanevil and many more. How did you find home at the UK label?

First of all, we wanted to go for a foreign label, there were no french labels we thought that could work for us.

I met Aly Dj Gilla of First Word Reocrds in a party in Paris about 6-7 years ago, and when we decide to send demos I told Fulgeance we could send to First Word and then the story begins as Aly Was really enthusiastic in signing Souleance.

Your music feels like, it has been inspired through a mixture of forgotten 60’s and 70’s nostalgia along with a touch of modern French hip hop and electro. There is quite a lot of diversity between your releases and we cannot clearly classify your productions in a specific genre.

How your influences from different musical periods play a role in defining the sound of Souleance?

Yes, I think your are right. It’s a good thing for us to be versatile in the way to sample and produce but, as you say, it makes it harder to classify what we do. We make the music with our instinct. It may sounds simple to describe it, but it’s like that. So we use sample from all other and from very different decades for example.

Fulgeance can send me a sketch of a track and we go for it, I send Fulgeance a sample or loop and we work on it.. But as versatile as we are, I think the Souleance Touch, if I may say so, would be to make a balance between organic samples and influence and an electronic Frenchy funkiness way to produce, that makes our sounds peculiar. I would say our latest EP, Brotha, for me, reaches that balance.

There has been a lot of debate about sampling and the barriers artists face these days with possible lawsuits and clearing samples. Madlib once said “If you like our music, stop posting those samples, because we ‘re going to get hit with lawsuits and have to stop making this type of music”.

What are your thoughts on this issue as producers who use sample techniques for your productions?

Well, I understand his point of view, because Madlib sells a lot and he has more samples issues. Posting samples… I like to recognize or discover a sample, the debate about lawsuits is long one to have I think, not sure to be good on that debate. But I think in years and decades to come this debate may perish.

Sampling is art form and not only in music, it’s just the way to do it, if you give another life to the sample, another twist, you make music with an influence but of your own…

Give us a few examples of artists that you would like to work with and any artist that we should look out for in the near future?

Apart from producing your own music, Souleance love edits. I am sure that you guys have re-visited loads of classic tracks to give them your own signature and you just keep them for yourself.

How important are re-edits for you? Do you produce them as tools for a performance or is it just the result of a sunny day hanging out with each other at the studio?

We love Re-edits or Reworks as they say also, we keep some secretly.. shah.
I think it’s a great tool for shows and for dj sets or just to listen to. Our main goal in this is to revisit tracks we love and respect, so ti can be very diverse again. It’s not always made for the dancefloor. The latest one we did, it’s of a Led Zeppelin track called Ramble On which is a very chill one. We are thinking of making some new ones, we really enjoy it.

What about your future plans? Is it going to be more touring now or you are planning to go back to the studio anytime soon?

Some shows coming over, we are impatient to party and perform in Soundwave Croatia Festival. I think we will have a studio session after the summer to work on new material for our live performance and also to work on new tracks.

Tell us where is your favorite place to eat and/or have a great time in Paris.

Well, I am from Paris but Fulgeance is from Caen in Normandie. In Paris, I love to go in a small but very nice bar and restaurant, called Le Beaurepaire near République, also Cafe A, Les Petites Gouttes and Le Professore & Gocce for Cocktails, classy but incredible cocktails.

Any message that you would like to share with the people of Soundwave Croatia Festival and your fans in Greece?

We are going to be Funky, Frenchie and even more, so beware, we are really looking forward to Soundwave Croatia! As for Greece Calispera, we wish to come over to this beautiful country.

Thank you so much for your time and we are really looking forward to your performance in Soundwave Croatia Festival.