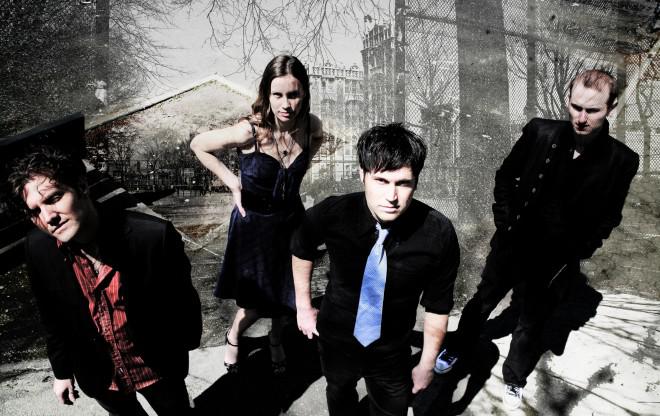 Can you tell me the story of Stellastarr, how you met, what made you form a band, your initial musical vision/ethos and where the name came from?

I could, but gee, it’s been almost a decade. Our bio is a great compilation of us telling those stories 5000 times. We started getting together just to play music. When it was two months later and we had like 12 songs (including about 6 that made the debut album) we started thinking of it as more than a fun thing to do.

Who would you say were your musical heroes /inspirations?

The band listens to a wide variety of things. Mine are: the Jesus And Mary Chain, Tom Waits, Nick Cave, Velvet Underground, The Cure, The Ramones and Pink Floyd. Amongst many others.

How has being a Stellastarr changed your personality?

Hopefully in good ways. Given me some balance and self-confidence. You’ll have to ask my friends if I’ve really just become an asshole.

Can you still listen to your debut EP?

Yeah. The third track “School Ya” on that is still a favorite to dust off and play live.

What’s the sound of your new album “Civilized”? What should we expect? What does the name stand for?

The sound is a culmination of subculture driving rock hooks with some noise solos thrown in for flavor. Expect about 37 minutes of music. Civilized is a word that can be looked at from many angles. Some of them are all but civil.

I saw that you will be touring a lot in the US, any plans for a European tour, or maybe in Greece?

We are plotting UK/European touring now. We sit around a huge oval table under a monster map of the globe. Ever see Doctor Strangelove? It’s like that. We played Athens, Greece once. We opened for Iggy and the Stooges. It was one of my all time favorite experiences.

Is the current music scene in good health or in need of a full medical? Any bands you’d recommend?

Great music is abundant right now. However, I feel little in the ways of a recognized scene. Perhaps that is good. Hype only dilutes a movement that can subsist without that kind of nourishment. Artists to check out: Devotchka Mono Ghost Town The Kiss Off Ghosts in the Valley Wakey! Wakey! The Postmarks

What do you do on your spare time outside the band?

Play lots of music, score independent short films, swallow books, haunt record stores, follow theoretical physics movements, wish I was onboard a space shuttle, take photos of nightlife/light fixtures/streaky things, pull apart stuff believing I can repair them, go out into the city alone and love the hell out of my friends.