The first question is about your performance in Sonar. I think this is your second time in Sonar Barcelona as you performed here back in 2013. How will this time be different and what is your relationship with the festival?

My first show in Sonar was with a laptop, Ableton and an APC40 controller. It went down pretty well and I had an amazing experience at the festival, but I felt that having a screen on stage made things a bit awkward. I thought that because I knew how to use the hardware it would be more of an interesting experience for me and the people who come to see me if I put together a hardware live show with no computer.

So you were using only Ableton before and now you only use hardware. As far as I know you’ve been developing your setup and tomorrow at Sonar it will be the first time that you will perform your new live show?

I did a live show before in Berghain with the new machines and that was one of the first times that I used them, so tomorrow at Sonar will be a refreshed version.

So how was that experience then?

The line-up was very strong like always in Berghain and it was a very good night. I really enjoyed it.

You have a forthcoming release which will be your second release on R&S Records after the Montreal ep which was released around the end of last year. This new EP is called Malfunction/Binary. Can you tell us a few things about it?

It was really exciting to join up with R&S and part of me thought about what would make sense to release with the history of the label.  I always like to put melodies in my productions where I can. I think it’s all about writing a track that makes you feel an emotion. If it is strong, it doesn’t matter what that feeling is but as long as it is strong that’s when I am happy. Then I send it to Renaat and he says whether we’ll release it or not.

Okay, and how did you move to R&S? I mean you released you last album “Obsidian” on 50Weapons and then the label shut down so you had to move somewhere else. Eventually that new “home” became R&S. How did this move happen?

Well, it wasn’t my decision to shut down 50Weapons (laughs). I was there from pretty much start to finish and I was quite happy there. Everyone was a bit sad when it shut down but that was the original idea behind 50Weapons; 50 strong releases and then that’s it. It was sad because at the end there were so many fans, the parties were incredible and nobody wanted to shut it down, but it was too late. We had already put the press releases out. We even joked about it that maybe we could keep it going as Zombie 50Weapons or 100Weapons (laughs).

When 50Weapons finished I received an email from someone at R&S saying “Oh, I’ve heard you don’t have a label anymore??” and it developed from there. I felt a bit lost in the period after 50Weapons as it was my home for so long. I didn’t have an exclusive contract with them but I would just send everything over to them, it was really nice. 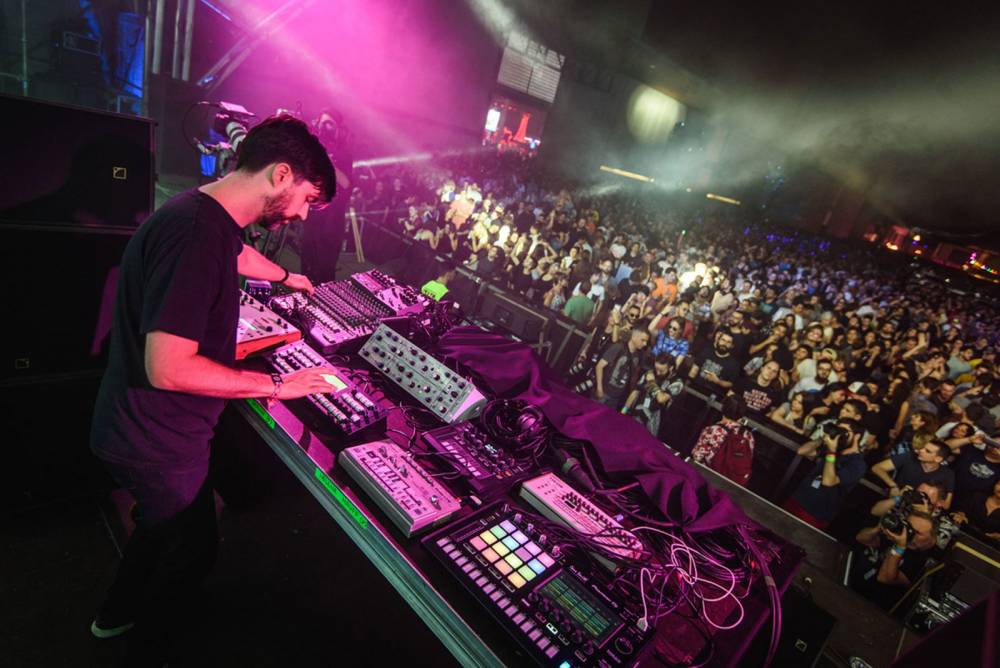 So that was the time when you moved to Berlin?

Yeah it was. After the label closed it took a while to get back into making music. I didn’t want to do the same thing with the exact same sound but I also didn’t want to do something that sounds like a different person, I wanted to do something that sounds like me. I am feeling happy now in R&S and I am also planning to release an album soon, so it’s good.

Oh yeah, I’ve read somewhere that you also plan to release you new album anytime soon. How will the new album sound like?

And do you use the same equipment for your live performances and production, or is it a different setup?

Not necessarily. Sometimes I produce with all the machines and sometimes just with the laptop but mostly I produce using hardware and then record it onto the computer. Sometimes if you are in the studio for too long then you get a bit bored. If you are on your own and you are in the studio and everyone is outside you don’t feel that you can stay inside and write something. I also like making music on the laptop when I am on a train, plane or hotel, especially after a very nice gig. I really like making this way even though a few people think I am this super purist analogue only guy.

And where are you going next after Sonar?

I have a few gigs in France, I am playing Bestival, Mother’s Finest at Griessmuehle in Berlin but I will also be working on the new album. I like touring and producing at the same time.

Well, since I joined 50 weapons I’ve been living between London and Berlin.

So I suppose you have influences from all those places and you managed to somehow incorporate elements from them into your sound which in my opinion is evident in your productions. I don’t think there are many people who successfully managed to do that.

It’s important to have different influences. In Berlin they love techno so much. It’s like pop music in the UK, you sometimes even hear techno walking past building sites. Berlin is a very nice environment to be in but it’s also nice to leave sometimes.

Which artists do you expect to see this year in Sonar?

After my live set I am definitely going to see Modeselektor and then I will try to catch Bicep and see what happens after.

What about new releases in 2018? Did you like any particular releases that maybe you want to tell us about?

I love the new Skee Mask album on Ilian Tape, its really nice.  I’ve heard some tracks from the new Blawan album and its very, very good with excellent sound design.

I think techno these days has become extremely popular and big, as there are many different places and cultures that support the genre and try to push things forward. In Europe, there’s the Spanish techno scene, the UK techno scene and of course the German scene. How do you feel as an artist who actively participates in this? Do you have a preference over small or big clubs?

It’s not something you can control. For myself, I think that I have to do what I feel I can contribute to the scene. Whether I am playing in a tiny basement or Sonar, it’s certainly a different feeling but I just like making music. As long as the scene is there, it’s great; it doesn’t matter whether it’s small or big. If you do things that you feel and come from inside you it’s fine. When you start thinking in terms of only commercial success then that’s it, it’s not fun anymore.

With big festivals there will be some people who will come to see you and some who get to know you and this is nice. Obviously it’s amazing with a huge crowd for the whole excitement and energy of it, but also when there is a very cool intimate vibe in a small club and you are so close to people; it’s a different kind of excitement.

Thank you very much for the interview!