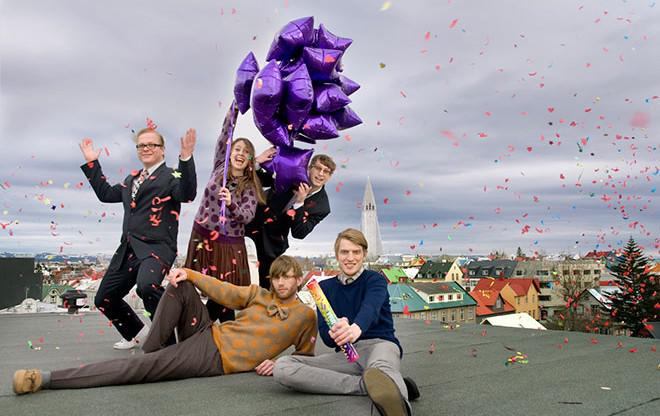 Can you tell me the story of FM Belfast, how you met, what made you form a band, your initial musical vision/ethos and where the name came from?

Árni R. has been making music for a long time and I met him at a fleamarket. He had a table and a computer and a microphone and you could sing and he would record it and then he made a song for you and you got a cd with the song. I recorded a song. It was very awkward but fun. Him and the other Árni V.(they met in a hospital some years before. ) were living together and that’s how I met Árni V. This was in July 2005. Just before Christmas me and Árni R. were having fun at their place and made a song as a Christmas present for our friends Inga Mæja and Bóas. That recording is actually on our album, it’s called Pump and is a cover of Technotronic’s Pump up the Jam. In 2006 we played Iceland Airwaves and then we were 4. Two Árni’s, one Örvar and one me. That’s when we decided that we were actually a band. We all knew Örvar from before. He went to school with Árni V. and I met him on a bus when we were teenagers. You asked about our initial musical vision. We don’t really have a clear musical vision. It just kind of turned out that way. The same goes for the name of the band. It just appeared one day and we liked it. It is all as random as how we all met.

How would you describe your sound? Ηοw has your music evolved since you first began playing music together?

I’m going to pick the easiest answer to this question and describe it as electro. I don’t know if it’s evolved all that much… my nose is to close to it for me to see. Maybe it’s gotten a bit more complicated.. that sounds bad.. I really don’t know. It’s best to just listen to it if you are curious about it.

Could you briefly describe the music-making process?

It varies but I can tell you that it doesn’t involve magic or hippie dancing. Mostly just lots of work and bending over computers and stuff like that.

“We come from a place where we count the days until nothing..” can you tell me more about it?

It’s a song about running down the street in you underwear just because you can and you don’t have anything better to do.

What do you do on your spare time outside the band?

Árni V and Örvar play football and Örvar is in a band called Múm. Árni V plays the guitar and writes comedy. I make comics for a paper called Reykjavík Grapevine and sometimes I illustrate children books and I also play keyboard in a band called Prinspóló. Árni R. makes electronic instruments and all sorts of electric things I don’t even know how to explain. He also has another music project called Hungry and the Burger.

What do you think about the music scene in Iceland? How come such a small country produced great bands like: Sigur Ros, Bjork etc..?

I like the music scene here. It’s very active. I don’t know how Sigurrós and Björk came about. I think it’s probably because they are so talented. There is no special music school here that produces people like them. They just made themselves. We get this question frequently but I never really know what to say. Maybe our winters are long enough so people have time to be indoors and make a lot of music.

Some bands you would recommend?