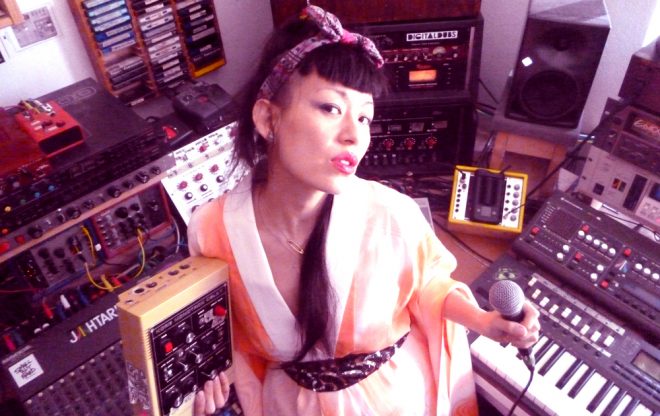 Let’s start our conversation with the following question. You are living in Europe several years now, how did you make the big decision to move to our continent? Does it have to do only with music?

I moved to England first to learn fine art. In the end I graduated graphic design course in Goldsmiths University of London. Then I was freelance graphic designer and illustrator for many street wear companies. Also I started skateboard company called Heroin Skateboards UK & Japan with my ex-husband in the late 90’s. I started doing my first music project Dokkebi Q around 2006 in London. To be honest several times I tried to move back to Japan to settle, however I could not find myself comfortable to express myself in Japan.

How is it for a Japanese person to be living in Europe? Are there many significant differences in our way of life and culture, between people of your country and Europe?

Of cause. When I moved to UK first time I struggle with language, culture and how inconvenient the life compared to Japan. Also I was not independent yet at that time so my survival skill was zero. Everything was new for me. I stopped comparing my life used to be in Japan and present in England. I accepted whatever in front of me and learn and absorbed many different culture and life style in UK. In the end everyone is so different individually, Japanese or European. As I am alien in Europe how I look like, how I speak, etc, I feel much more comfortable who I am and what I am now. So all good for me in the end.

Japan has showcased and given us many talented music producers, DJ’s and bands from all kinds of music genres. Usually, there is also a strong element of experimentation, at least to our European ears. What do you think makes the sound of Japanese artists so special?

I guess foods, 4 seasons, environment and good amount of stress.

Apart from your involvement with music production and singing, you also have an identity as a visual artist and graphic designer. Which of the covers/artworks from releases that you’ve designed are your favourites? Do you consider that the image of an album or the artist, in general, plays an important role in the success of a release?

At this moment my favourite is Karma No Kusari that is my debut solo album from Jahtari Records and also I did one of the Acid Ragga series for 7inch record design for The Bug (Ninja Tune) – Ganja Baby ft. Daddy Freddy – here.

These two are my favourite now.

Yeah the art cover is important for sure and will draw the attention but I don’t think it does makes success of the album or artist. Most important thing is their music. I love those artists or their music so much even their album art is so shit…! And the shit cover becomes good shit in the end after blown away by their music.

In September of 2016, your personal debut album Karma No Kusari was released on Jahtari which is already much loved. Was it easy to connect Enka with a Reggae Dub sound? Was it your idea, or something you’ve heard of again? Do you comply with the fact here, of tagging your sound as “Cosmic Vintage Pop”?

The idea was easy for me to come up with Japanese Enka or Kayokyoku blend with Reggae or dub sound. There are so many singers in Jamaica singers like Japanese Enka style, like Horace Andy, Ken Boothe or Garnet Silk. They have very soulful expression with lots of vibrato throat singing technichs. When I listen them, my heat beats like when I listen Enka or Kayokyoku. For me they are same frequencies in music. So I had this idea for long time and I wanted sing and write lyric like Enka with updated pop version.

In 2012 I talked to disrupt who is boss of Jahtari and he made already cover version of Japanese Enka Ringo Oiwake in Reggae before I met him. So it was so easy for us to process the idea and digest them. We live in same planet. Disrupt use lots of vintage gears and non computer for producing this album. So I guess in the end naturally the sound became ‘Cosmic Vintage Pop’ as someone described our music.

We now know that you have a child with Jan Gleichmar (Disrupt) and we are sending oceans of love and blessings to the new small member :) Does that find you having less time, -dedicated to music? Do you believe that you can balance your obligations, music career and family time altogether?

I made 3 albums during the pregnancy and after the birth of our dughter. Of cause I don’t have much time now as I am little one’s mother but I focus more and concentrate within small amount of times than before. Or maybe I try not to be perfectionist and prefer good imperfection now..? Anyway Disrupt is also very good father and he does good care for our daughter. We trust each other very much so it is easy for me to go away from my family for shows or producing music with other producers in different cities.

All before this, of course, you had already become a member of King Midas Sound, gaining great popularity and recognition. Do you consider yourself lucky, collaborating with The Bug? How did you meet? Will we see a next release from the two of you in the near future?

Yes it was lucky to meet The Bug. He came to see my show at Plastic People in London, my first music project with Japanese guy Gorgonn called Dokkebi Q. He already knew one of my track called Dalston Imperfection. When you are enthusiastic and expressing your passion, you will magnetise lucks. They all meant to be. There is no co-incident. He asked me to do dub-plate on Poison Dαrt track. Later that became Yellow Story on Karma No Kusari album. I was talking to Kevin (The Bug) about racism of my daily life in London. He was so surprised about the fact I am getting all the shits regularly, and told me to write them and sing!

Yes, it was so hard ship to build King Midas Sound especially for our live show. Kevin never compromise the sound and music. I respect him so much and learned from him the power of sonic especially in physical live situation.

You also collaborated with Kevin Martin in another beautiful project Black Chow on Jahtari. Was it just a project, that will for now remain inactive?

Yes, that was one off collaboration. We actually made many tracks and there are several good demos and maybe we will use them for next King Midas Sounds album or maybe not.

You have presented two new projects this year. The first one is more experimental and mysterious NoinoNoinoNoino and most recent one with Dj Scotch Egg and Andrea Belfi, the outstanding WaqWaq Kingdom. We believe both of them are very innovative, musically speaking. Can you tell us why the first of them doesn’t stand with your name as Kiki Hitomi? For the second release, what is the feedback and response you’ve had from your appearances alongside Gonjasufi on his European tour?

NoinoNoinoNoino is one take improvisation music with me, DJ Die Soon, DJ Hotel and Dead Fader. It was holy spiritual experience through jamming with them for 3 days in Berlin. I barely stand up singing because I was too high. Most of my words and lyric came out unconsciously. I try to listen what I was singing and the track called Chain sounded “cut the chain of Karma”. That track became my album title Karma No Kusari. All the sudden I found the meaning and story behind my debut album Karma No Kusari. It was strange experience. But I heard about 70% or more of your brain works as subconsciously. So sometime I love working without theme, I like the way of making music or art like post-rationalisation.

Most of people did not know who we are WaqWaq Kingdom and they went dancing crazy with our beats in the end. We wear African pattern cape costume and disguise ourself. But I take off my cape in the middle of the live set, and they looked so surprised as they did not expected the Japanese woman appear as WaqWaq Kingdom’s music is very mixed genre. We are now already making next EP and it is very danceable EP as we got lots influence from African beats mixed with acid 8-bits. We are expecting to play more live shows this year!

Is this the first time you are visiting Greece? What are your expectations and feelings? You can leave a message for your Greek fans that are anticipating on the Paranoise event.

This is second time I come to Greece but first time to play live show in Greece.

I hope they can feel my vibration and emotion though my music and share the wonderful time and passion together.

Thank you very much for your time.

We are looking forward to watch you live here!